Weeds or Wild Flowers - What do we See?

One person's weed is another person's garden flower. I've seen the delight in the eye of visitors from Europe when they saw what they took to be garden flowers such as white Arum lilies (Zantedeschia) or blue Agapanthus flowering by our roadsides.

It's not just visitors who see them as delightful wild flowers or as garden plants, lots of locals do too. But how we see them doesn't alter the fact that these and many other imported plants grow, and spread, like wild fire in New Zealand's climate. They encroach on dunes, on bush remnants, on stream banks pushing out native plants and reducing our,  and therefore the world's, biodiversity.


This time of year, bone seed (Chrysanthemoides monilifera) and pink ragwort (Senecio glastifolius) are among the bright roadside weeds. A slash of acid yellow bone seed flowers mars the subtle and varied greens of the native bush, as it invades a bush reserve, changing forever what the bush looks like in the spring. The pink ragwort pops up like an irritating opportunist where ever there is a clearing.

I've been inspired to write about weeds thanks to a prize I won a few weeks ago during Conservation Week. I won a spot prize,  "The Weed Control Handbook" by entering a challenge to post local weeds on iNaturalistNZ's 'Dirty Dozen' project. 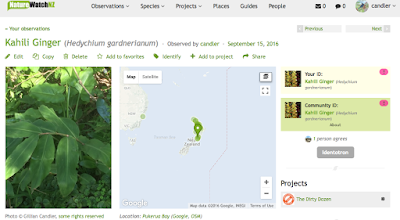 Sadly it was too easy to find some of the Dirty Dozen close by. Climbing asparagus (Asparagus scandens), wandering Willy, wild ginger (Hedychium) are all flourishing by the roadside.

It's a challenge, but necessary, to shift our points of view. As a country we've done it with gorse, which was brought in as a hedge plant that then ran rampant over farmland. Perhaps it's easier to see a scratchy, spiky plant as a weed, especially when it affects the economics of farming. But we'll not be successful with weed eradication unless more people can make the shift to seeing the good in our native plants, and the bad in the invasive, introduced plants. A nice feature in "The Weed Control Handbook" is the "Replace it" section where an alternative plant is suggested (mostly native) instead of the 'weed' plant. This information is also available in local form as 'Plant Me Instead booklets'. It's a helpful way to introduce native plants to gardeners.

So how do we go about shifting people's perspectives?  A recent Australian article, on The Conversation, People are blind to plants and that's bad news for conservation suggests the need for us to develop emotional bonds with plants, which is where understanding what natives are edible or thought to have healing properties helps, as we will develop emotional bonds with helpful plants. I think too that the adoption of iconic images which become part of our identity should help - kowhai, nihau, silver fern, pohutukawa - but only if we know the actual plants, how many wearers of the silver fern have seen and identified one in the bush?  Unfortunately some iconic images also include invasive weeds, such as the colourful images of lupins invading braided rivers in the South Island.

Alongside emotional bonds then is the need for knowledge. Knowledge of what a silver fern actually looks like and where it grows; knowledge of the damage lupins do. Learning about plants can be a little like learning a foreign language.  (I've blogged about this in learning the language of plants.)

But it needn't be, if we start learning about them when we're young. In the children's book "In the Bush: explore and discover New Zealand's native forests" Ned, the illustrator, and I show plants and animals together in the ecosystem. I hope children will see that native animals (which tend to be the focus of conservation interest) rely on our native plants for habitat and that those plants are as worthy of conservation as the animals.

WAYS TO LEARN ABOUT PLANTS


A FEW OF MY BLOGPOSTS ABOUT PLANTS
The Importance of Trees
Nature Walks at Otari Wilton's Bush
Visiting New Zealand's Forest Giants
Pilgrimage to a Tree
Puriri Moths and Caterpillar: a secret to discover in trees

Posted by Gillian Candler at 15:50