A Visit from Ruru: owl inspiration

A few weeks ago I heard a commotion in the garden - the blackbirds were complaining, it sounded like they were giving another bird a good telling off. I was curious to see what all the fuss was about. That's when I saw a ruru sitting on a branch having its daytime nap. The owl didn't seem at all bothered by the blackbirds and eventually they gave up and moved into another part of the garden.

I've heard ruru or morepork at night - their distinctive call echoes in the gully nearby - but I never imagined they might be hunting in our garden. These owls hunt wētā, moths, cicadas, small birds such as silver eyes, rats and mice. They need large trees with holes or cavities for their nests. We have some large trees but I don't know if any would be large enough for them to nest in.

There's something about their large eyes and piercing stare that is slightly unnerving, even when they are sleepy like this one. Meeting this ruru inspired me to write a little haiku.

Read more »
Posted by Gillian Candler at 10:21 No comments: 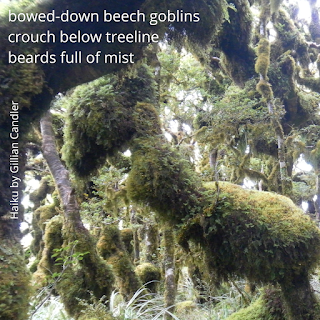 Two of my haiku were published in a fine line Spring 2021, the magazine of the New Zealand Poetry Society.

About haiku
Maybe you learned to write haiku at school and were told haiku were poems of three lines with 5 -7 -5 syllables. Today haiku can be 2 or 3 lines and are almost always less than 17 syllables. Haiku use strong images to convey the essence of a moment in nature.

Notes: Krummholz is a word that English language has borrowed from German to mean a tree that is stunted, bent or twisted. It wasn't that easy finding photos that were an exact match, as these haiku were written about moments of seeing that weren't necessarily captured by a camera.

Find out more about writing haiku

This is written as a guide for teachers, but is useful for anyone considering writing haiku, especially the definition and explanation of haiku on page 3:

Posted by Gillian Candler at 09:17 No comments:

Read more »
Posted by Gillian Candler at 11:46 No comments:

Bringing Back the Ocean-going Birds

Mention ocean-going birds and the mighty long-winged albatross comes to mind. But the ball of fluff I hold in my hands is no heavier than a pompom and not much larger.

Weighing in at just 40-50 grams, white-faced storm petrels are a small miracle. The chick is so tiny, so delicate. But when I loosen my hold, the Jesus Christ bird rockets out, its long legs springing it off into the bushes. Once fledged this bird will be walking on water, its long legs and webbed feet bounding across the waves. For now though, I must wrangle it safely back into its burrow.
Read more »
Posted by Gillian Candler at 12:03 No comments: 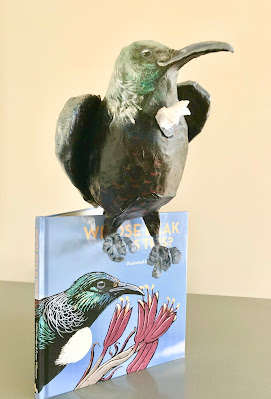