Last month I returned to Blue Lake. I'd visited the lake a year ago and blogged about it in Trouble In Paradise after witnessing an attempted attack on an endangered blue duck or whio by a rat. I'd told my tramping companions about the blue ducks we'd sighted last time, so we had high expectations of seeing some beautiful whio again - and we were hoping not to have a repeat of the rat incident!


The notice board in Blue Lake Hut was pinned with scraps of paper listing sightings. One person had seen 4 whio, others a pair. A hut companion, a frequent visitor to the region told us he'd seen whio ducklings last year. So with great interest we walked the few minutes to the lake in the early evening - a good time to see them according to the list on the notice board. There was nothing to be seen but more stunning colours and reflections of the mountains around this extraordinary lake.


Early next morning I went down to the lake and found a fellow tramper - in pyjamas - snapping away with her camera. The whio had arrived. She said they flew in just before seven. I ran back to the hut to wake my companions and spread the news. Soon about ten people were gathered by the lake side. Oblivious to the bystanders, the ducks continued to feed in the shallows.

We got a good view of their feeding technique. Beak down and bottom up, they dipped down again and again after the insects and larvae among the stones. Here's a video of them feeding taken by Brian Queree.

Judging by the calls later that evening (they returned again around dusk) our whio were a male and female. The male makes the classic 'whee-oo' whistle, while the female makes a growling sound.
You can listen to their sounds at NZ Birds Online.

While they look quite grey, I found a lovely painting of them by local artist Jan Thomson which reflects the blue of Blue Lake, see here on Whio Forever's Facebook Page.

And here is Fraser Williamson's impression of feeding whio from our book "Whose Beak is This?"
I like the way he's picked up on those beady yellow eyes.

Whio have amazing beaks, in the photos above you can see they have soft edges which help them feel food under water.

How to get to Blue Lake
You can tramp/hike to Blue Lake from several direction within Nelson Lakes National Park. We caught the water taxi across Lake Rotoroa to Sabine Hut. From there we tramped up to to West Sabine Hut (5-7 hours) and after a night at the busy West Sabine Hut, we headed up to Blue Lake (3-4 hours) and were there in time for lunch. To have a chance of seeing whio, you would need to stay at least one night. This is an easy to moderate tramp, depending on the weather. Super-fit and experienced trampers could do it one day - but might miss out on some of the enjoyment that comes with the slower pace. (Tramping or hiking involves carrying your own food, clothes, sleeping bag and other gear, see the link below on tramping in Nelson Lakes National Park for more information.)

On this trip we saw South Island robins, brown creepers, fantails, tomtits, little shags, bellbirds, on a previous trip we saw kea and riflemen, and we know others have seen rock wrens. The forest is mostly beech - red, silver, mountain, with some podocarps such as miro and matai, and a few broadleaf trees and shrubs particularly around the river and river flats. We also got stung by the pesky wasps that have invaded the park.

Thanks to Brian Queree for letting me use his photos and video, to Philippa for her blue duck enthusiasm and to my other tramping companions for coming along on the trip.
Posted by Gillian Candler at 13:34 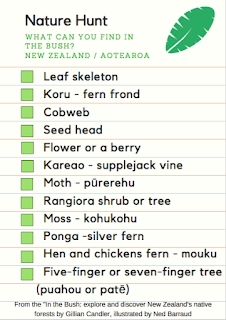