A Coastal Walk - animals that I see in Pukerua Bay

After writing about the plants of my coastal pathway in my last blogpost, Cyclone Gita blew in. Extraordinarily high seas washed away much of the pathway and deposited massive piles of driftwood on what was left. Plants on the sea side of the path have mostly died, but not all.  I hope they are resilient.
Taking this path, very occasionally right around to Plimmerton, but usually to the Pukerua Bay Scientific Reserve and back, I've had the privilege of seeing many different animals, some unexpected.
It's only recently that I've attempted to photograph them. More often than not I only have my phone camera handy. Photos are a good way to convey an animals features or behaviour to others. We get instant recognition, responding with an "Ah yes that's what I saw on my beach" or "how amazing who knew gulls would do that?"


But for the walker whose steps have taken on a pleasant rhythm, stopping to take a photo can interfere with enjoyment. For a rock-hopping fossicker the sight of an octopus oozing through a gap in a rock pool is all the better seen with bare eyes instead of through a view finder or screen. For the volunteer monitoring traps, the hands are full and there's a job to be done so the camera stays in the bag. But recently I've been doing walking bird counts, and this has given me more opportunities to stop and take photographs.

Insects
At this time of year, clouds of moths and butterflies rise from the bushes around the path. The easiest to recognise is the copper butterfly.

Through Nature Watch NZ (now at a new internet address and called iNaturalistNZ), I have learned that there are at least two kinds of copper butterflies here. The Rauparaha copper and Maui copper. The difference is in the black vein lines. Maui copper have thin double lines, whereas the Rauparaha copper has one thick line. Suddenly taking photos is worthwhile. The butterflies don't stay still long enough to be examined, but a photo can be looked at carefully.
Experts on Nature Watch NZ ( iNaturalist NZ) also told me that the blue markings on the butterfly's wings, tell us it's a female. Butterflies and moths aren't the only insects. Through summer, the cicadas sing, and fly clumsily bumping into our backs or crashing onto our hats. Looking close ladybirds can be seen on the rocks among the plants. 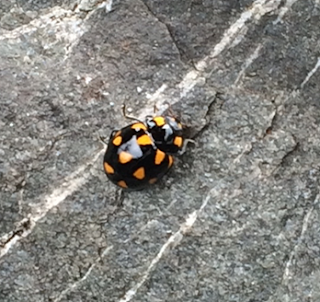 The lizards are the best kept secret around here. Locals know they are here but rarely see them. Strangers usually have no idea. Some of the lizards are nocturnal, so only seen by the trained volunteers working on the monitoring project. But the grass or common skink can be seen darting out of sight on a sunny day.
Birds
I've already blogged about the herons around the coast. But things change. The reef heron hasn't been seen since last year. The white-faced herons have had chicks and several leggy juveniles have been hanging around. This one wasn't smart enough to let me get past and kept moving along the path in the same direction. Maybe I kept it away from preying on the lizards for a little while.

I've been doing regular bird counts along the coast. Counting birds as I walk along and jotting down what I've seen and where. That's how I know that a couple of gannets can often be seen diving and fishing in the sea around near Wairaka rock. Sometimes they fly around to the bay where the houses are. They are spectacular to watch as they plunge straight down into the water to catch the fish they've seen from high in the sky.
I think of the coast as three zones, the 10 metres of sea closest to the rocks is one zone. Then there is a wide area of rocks between the path and the sea. Here you can expect to see a pied shag or two drying its wings. In spring, red-billed gulls and terns will be busily flying above the rocks along the coast from nest site round to the bay and back again.
Kingfishers kotare are often out on the rocks, perched waiting. They'll fly up above the path too, perching on rocks or branches spying out food.
The third zone is around the pathway, in the grass and bushes. Here is the greatest variety of birds: blackbirds, sparrows, fantails - pīwakawaka, grey warbler - riroriro, green finches, chaffinches, silvereyes - tauhou, welcome swallows, even feral or rock pigeons. Last year I finally saw a pipit, but only the once, despite looking regularly.
One bird that the counts don't include is the little penguin - kororā. They only come on land at night. Sadly the only sign is the occasional dead penguin. Life is tough for these birds as they are easily killed by dogs, which is why dogs should always be on a lead and under control along the coast and in the reserve.
The volunteers of Ngā Ururoa on the escarpment between Pukerua Bay and Paekakariki have created a species list https://inaturalist.nz/check_lists/382947-Ng--Uruora---K-piti-Project-Check-List. To see what has been found and reported on in Pukerua Bay go to https://inaturalist.nz/places/pukerua-bay-predator-free-project-scientific-reserve. Keep adding your sightings to iNaturalistNZ with accurate location data and we'll soon be able to create a species list for the Pukerua Bay coast too.

Posted by Gillian Candler at 13:42 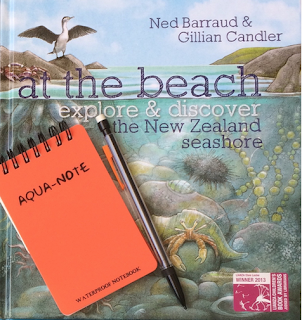