2020 has turned out to be a year in which we've all had to find sanctuary at home. Even once lockdown restrictions lifted we've continued to seek out sanctuary close to home rather than farther afield. With this in mind, I set out to Bushy Park - Tarapuruhi near Whanganui, about 2-3 hours drive from my home.

Bushy Park has long been a Forest and Bird reserve, but perhaps what's less well known is that it has been a fenced sanctuary since 2005. (Fenced sanctuaries have pest proof fences around them which are designed to keep out possums, stoats, rats and other introduced pest mammals.) Sanctuaries are often thought of as safe havens for endangered birds and other native animals, however, a standout of the Bushy Park experience is the ancient lowland forest and its spectacular trees.This lowland forest remnant is peppered with giant Northern rata (Metrosiderus robusta). The most famous is called Ratanui. At one time it was thought to be the largest Northern rata. According to the Notable Trees Register it is a massive 36.2 metres high and has a diameter of 3.8 metres. (The Akatarawa giant rata beats this at 39 metres with a diameter of 5 metres.) That there are larger rata doesn't detract from the majesty of Ratanui. Impossible to photograph in one shot, here is a video of its trunk.
And for those that can't view the video - a screen shot.
Northern rata start off life as an epiphyte in the crown of another tall tree such as rimu. While most epiphytes get all the nutrients they need from the sun and rain, as the rata grows it sends down roots to the ground to get more nutrients from the earth. These roots also send out girdling roots which encircle the host tree. Over time it sends down more and more roots, and by the time the host tree dies the rata may well have completely encircled it. The roots form what is called a pseudo trunk which supports the flowering crown and which is hollow inside.

Once Northern rata become a tree in their own right, they then may host many other epiphytes including perching lillies, ferns, puka and other small perching shrubs. Possums damage and eventually kill rata, as they are one of their preferred trees to eat. So the sanctuary fence has come just in time to save this giant.
Other large tree species in the forest include: tawa, rimu and pukatea.

The fence surrounds and protects a 98-hectare lowland forest remnant. Within the fence is also a historic homestead where guests can stay and enjoy the bird song.

A second lower fence within the sanctuary aims to protect the forest from any rodents that might hitch a ride in a car or camper van that drives in to visit.

Birds that thrive here include: tieke - saddleback, hihi - stitchbird, toutouwai - North Island robin. These three bird species all struggle to survive in the presence of introduced mammals. Both the tieke and hihi had been reduced down to small numbers living on offshore islands before the introduction of fenced sanctuaries. 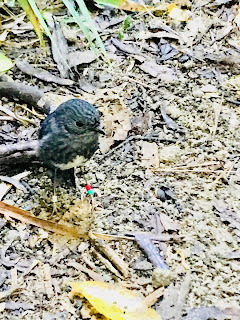 These aren't the only birds to do well here. Large numbers of kererū - New Zealand pigeon, korimako - bellbird, and tūī were seen and heard on my visit. 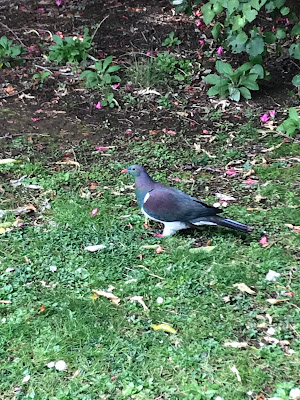 Kererū graze on the homestead lawn!

It's always a pleasure to see and hear the birds, and to be aware of the thriving network of other animals - insects, spiders, snails, lizards, etc that form part of this ecosystem.

Posted by Gillian Candler at 10:16