Nature Heroine - Sheila Natusch and the orchids of Rakiura

I've just seen "No Ordinary Sheila", the documentary about the wonderful and not at all ordinary Sheila Natusch. This documentary was a clever blend of recent interviews and family photos, integrated with archival films from the relevant times in her life of, for example, of childhood on Rakiura / Stewart Island, high school at Invercargill, tertiary studies in Dunedin and work and marriage in Wellington. The documentary makers also used occasional current footage where it conveyed atmosphere, for example, of pupils at Invercargill Girl's High School. 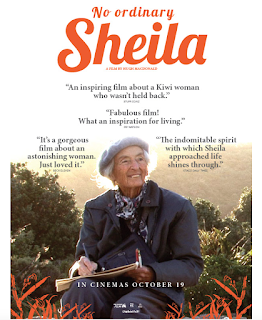 Some interviews show her on a couch in a friend's living room or at the kitchen table talking to another writer or tramper, and it felt that we were present in the room listening to an elderly relative talk about their extraordinary life.


As a fan of Rakiura / Stewart Island I particularly enjoyed the current and past footage of the island, along with the description of what it was like to grow up there.
I won't spoil the experience of watching the documentary by repeating here the friendships, history and events that are covered. But watch the trailer here if you want to know more.
https://www.youtube.com/watch?v=rEU41PuWXOA


The overwhelming impression was of a life well lived, of a resilient and determined individual, who got on with life and had no regrets.

I would love to have heard her talk more about her interest in plants and about writing, illustrating and her experiences in the publishing industry, but that reflects my own bias, and I think for the general viewer this aspect would have been covered adequately.

Inspired, I've pulled out a couple of booklets that I have of hers: New Zealand Mosses, 1969 and A Bunch of Wild Orchids, 1968.
Reading these again, I'm impressed by her fresh chatty style, which would have been unusual for the time, but is similar to the tone taken in social media today. A Sheila of today would be blogging about what she'd seen or posting her sketches on Instagram perhaps.

In A Bunch of Wild Orchids she talks about having her own orchid garden as a child on Rakiura / Stewart Island, taking a patch where some orchids already grew she added in other orchids that she found elsewhere. While others were growing up admiring imported garden flowers, New Zealand natives were all she knew, what a rich experience that provided her with. "Most of my orchids were there already, living on a dark peaty bank under the muttonbird trees. There was one with a creamy gold-and-pink flower, set on a dainty stem above flat spotted leaves, the whole plant fuzzy with tiny hairs."

On recent visits to Rakiura, I've sought out the orchids along the village lane ways and beside the tramping tracks, often hiding bashfully, but, I like to think, waiting to be found and admired.
Sheila had a knack of explaining things clearly to the amateur, although she was no amateur herself.   "Plants, like people, occur in families; or at least botanists find it convenient to suppose that they do, putting the orchids in one family, the lilies in another, and so on." And she had a sense of what would confuse her audience - of what to put in and what to leave out. ".. in sketching some of the strange little plants, I have not bothered about species. One cannot even be cocksure about the genera: these things can alter!"
Giveaway
I was the lucky recipient of some "2 for the price of 1" vouchers for this movie, most of which I gave away on Facebook and Instagram. But I still have one voucher left. The first blog reader to email me at author@gilliancandler.co.nz and ask for the voucher will receive it in the mail (NZ postal addresses only). THIS PROMOTION IS NOW CLOSED

Posted by Gillian Candler at 12:58