Birds at the Beach - vulnerable and at risk


Solitary stalkers, noisy pairs or squawking flocks - we rather take our shore birds for granted. Gulls in particular seem to be ever present, squabbling over a dead fish on the beach or trying to steal our fish and chips. So it came as a surprise to realise that red-billed gulls (tarāpunga) are considered to be 'nationally vulnerable'. The second surprise was that of all the birds in the bush-clad seaside village of Pukerua Bay, the ones that are under threat are almost all shore birds rather than those that live in the bush.

Here's a list from "Key Native Ecosystem Plan for Raroa-Pukerua Coast 2015-2018" published by the Greater Wellington Regional Council. Apart from the NZ Bush Falcon they are all shore birds.


Nationally Threatened and At Risk species in Pukerua Bay
Birds

What do these categories mean?  I looked them up on the Department of Conservation website and found this helpful diagram showing how the categories relate to each other.

It's a stark reminder that the worst category is 'Extinct'!
Animals like the reef heron (matuku moana) which are Nationally Endangered 'face a high risk of extinction in the short term' while at the other end of the spectrum the birds in the At Risk categories 'are not considered to be threatened but could become so if a new threat arises'.

At Risk and Threatened Birds in Pukerua Bay
For a number of years red-billed gulls have had a nesting colony on Wairaka Rock, although they were absent last spring. Some young gulls have appeared with their parents at the beach this summer, although not in the same numbers as the previous year, so they must have found another a nesting place nearby.  Gulls are scavengers, which is why they are so interested in our fish and chips, but they will scavenge anything edible. Last year I spotted them trying with difficulty to perch with their webbed feet in the taupata trees along the shore path, they were after the tasty berries.
One thing to note about red-billed gulls that used to confuse me - the young birds have black bills and black feet which both change to red within a year.

I've occasionally seen caspian terns (taranui)at the beach, they are the largest species of tern and are usually in pairs. White-fronted terns (tara) are a more common sight, they arrive in large crying flocks and quickly stain the rocks white with guano. They also nested on Wairaka Rock in previous seasons, although like the red-billed gulls were absent last spring.

The most endangered bird at the beach is the reef heron (matuku moana). A solitary reef heron is often seen after southerly storms working its way through the rock pools. The best place to spot one is by the stream near the gun emplacement. Here are some photos of a reef heron having a bathe on a hot day. 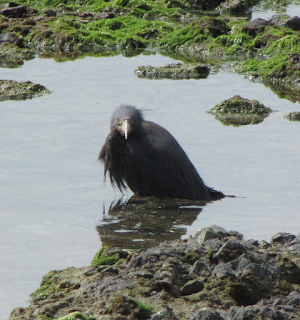 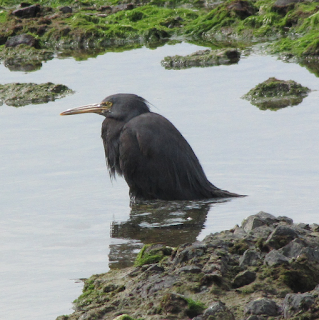 Pied shags (kawau) roost in a macrocarpa above the first houses along Brendan Beach. Two or three nests can be seen and sometimes there are more than 15 birds in the tree.

The occasional black shag (kawau) is seen around the coast.  There is often a pair of variable oystercatchers (tōrea)at the beach, piping shrilly as they fly low across the rocks.
They are called variable because their colour varies, some are all black but others have some white on them. Pied oystercatchers which are more common, have a white breast and a very clear sharp border between the white and black, unlike the variable oystercatcher whose white breast is smudged. I have never seen a pipit (pīhoihoi) along the beach or around the coast, now that I've read this list I'll look out more keenly they have a distinctive way of running along the ground and often seem quite tame.

Common Birds at Pukerua Bay beach
Other shore birds seen at the beach are black-backed gulls (karoro) and white-faced herons (matuku moana). Water birds such as kingfishers (kotare) and paradise shelducks (pūtangitangi) also live along the beach, and occasionally black swans (kakīanau) visit. Some garden birds take advantage of the food available at the beach, I often see starlings picking their way through the seaweed and blackbirds can be seen doing this sometimes too.

Useful links
To find out more about these birds see NZ Birds Online http://www.nzbirdsonline.org.nz
To record your own observations or find out what other observations people have made in Pukerua Bay, you could join iNaturalistNZ, BirdingNZ or eBird.

SaveSave
Posted by Gillian Candler at 15:57