Behind the Scenes - Nature at Te Papa

Usually I'm out and about exploring nature - outside. But recently Wellington's 150th Capital Anniversary provided a special opportunity to explore nature indoors. An open day at the museum - Te Papa Tongarewa - was a unique chance to see some of the treasures stored there.

The day started with a guided behind-the-scenes tour of the Botany collection. Te Papa's curators had carefully selected some treasures to show us, from plants collected by Solander on Cook's 1st voyage 1768-1771

and items from a historic lichen collection preserved in handmade books and boxes to hold the rocks that the lichens were growing on.

We soon got the message that the collection isn't just about preserving 'old stuff', we were shown how the ferns in the collection enabled a curator to make and exciting find a new tangle fern, and how the curators also are out and about looking at live plants and making discoveries such as how fungus gnats may be pollinating spider orchids who are disguising themselves as fungus - wow nature can be really weird.

Next stop was the Te Papa storehouse in Tory Street for more weird and wonderful stuff. 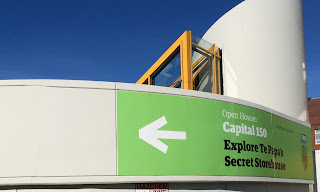 Here the queue snaked through the fish preservation area (no photos allowed due the flammable nature of the preservation material) to the subterranean vaults with skeletons, fossils, shells, and lots more.
There were staff on hand to tell us a few things about the finds, but we had to keep moving with the press of people behind wanting to get a look too.
These tiny snipe were a revelation, I had no idea how little snipe were, since they are extinct here on the main islands.
But this mossy kakapo had to be my favourite and while its interesting to see a well preserved kakapo to get an idea of colour and size, its nothing like seeing the real thing - I hope you'll be going to see the live Kakapo, Sirocco at Zealandia.

Posted by Gillian Candler at 10:31