Who's In the Garden? my Garden Bird Survey

For a number of years now I've been counting birds as part of the annual Garden Bird Survey. To start with it seemed a bit artificial only counting the birds seen in one hour. But knowing that many birds are visiting, moving from one garden to another, it's a fair approach. What began as a simple survey led me to was to spend more time looking at who was in my garden and when.


When I did that first survey, I found that grey warblers visited our garden. They are such tiny, hard-to-see birds but their trill surpasses all but the tui's. They, and the fantail regulars, are after the insects they can snap up. To start with I thought they were winter visitors only - until I found the remains of nests in the autumn. Clever little birds, they obviously keep a low profile when they are nesting.
The tui have been nesting here all along too, and making a song and a dance about it. Now I know what that sound loud buzz of wings overhead is about when I'm hanging out my washing. It's a 'keep clear of my nest' warning. Then two years ago rather dramatically a tui nest fell down and the chicks had to be rescued, which mother tui was quite happy for me to do. You can read about this in an earlier blog Tui Chick's in the Garden.
The Garden Bird Survey was very helpful when it came to deciding which birds I should include in my book In the Garden which was published in 2013. 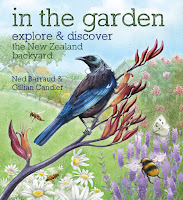 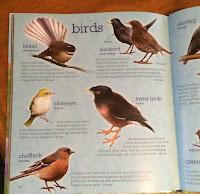 Looking at this year's preliminary results, I would have been tempted to include bellbirds and grey warblers, as the numbers reported have increased over the previous years. Three times as many grey warblers were reported compared to the last two years - see Landcare's interactive graphics that show where a particular species was seen around the country. But it's not as simple as taking numbers reported without looking at other factors too, like region and garden type. I was interested to read about the Number-crunching challenges that the Landcare scientists discuss when looking at tui numbers. So I'm looking forward to reading more as the results are processed and of course taking part again next year. Meanwhile I'll be paying attention to who's here in spring and summer too.
Posted by Gillian Candler at 10:28