Blackbird or Tui - which bird is it?

Last week I was invited to read In the Garden to the lovely, lively children at Sand Dunes early childhood centre. I listened very carefully to their comments and was pleased to see the slugs and spiders in our garden have as many fans as do the pretty and more obvious butterflies. What most interested me was that the children were confused between the tui and the blackbird, at least in the first reading of the book.

The cover shows a tui and it appears on other pages too. 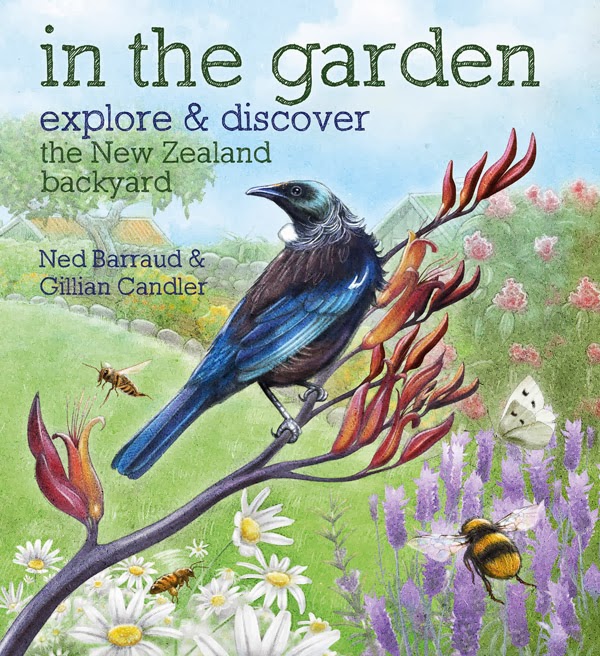 Here are some questions to ask to help children learn about the difference between tui and blackbird, not just in the pictures of the book, but also in their gardens.

Where do the birds like to gather food? (Blackbirds will hop around on lawns and on the ground under trees, but you are unlikely to see a tui on the ground, they will either be flying around or perching on flax bushes or in trees.)

Native versus Introduced Birds - a long footnote
In our garden the different places that the tui and blackbird feed means that they seem to co-exist peacefully enough. So I've been surprised by the heated debate in the letters to the editor of the Dominion Post comparing our noisy, bossy native tui unfavourably with the introduced blackbird.  Some strange comments have appeared, some people think birds exist for their listening pleasure, melodic birds being better than the tui's avant-garde mix of bells and whistles. Others claim that planting more native kowhai trees that attract more tui (who come to feed on them) is changing the 'natural balance'.

Ironically the idea that birds exist for our pleasure (or use) was the main reason that early European settlers brought birds like blackbirds to New Zealand, thereby changing forever the 'natural balance'!

Our book In the Garden describes both native and introduced species that are commonly found in New Zealand gardens. Of the 9 most common garden birds identified through the Garden Bird survey, only 3 are native: the fantail, the tui and the silvereye (which introduced itself by flying all the way from Australia 200 years ago).

If this is a topic your children are interested in, here are some ideas for talking to children about introduced and native birds:

Posted by Gillian Candler at 16:53